We're sorry, you're outside our current delivery area.

YUM! We deliver to you on

HOW IT WORKS
1) Market offerings/prices finalized by Friday morning for the following week (*see below)
2) Customize your order until Sunday 12:00
3) Look for these icons about freshness and food miles:

*If you register and wait to receive the email on Friday announcing the market is open, make sure our emails don't go to your spam/promotions folder. We'll send you a welcome email after you register. 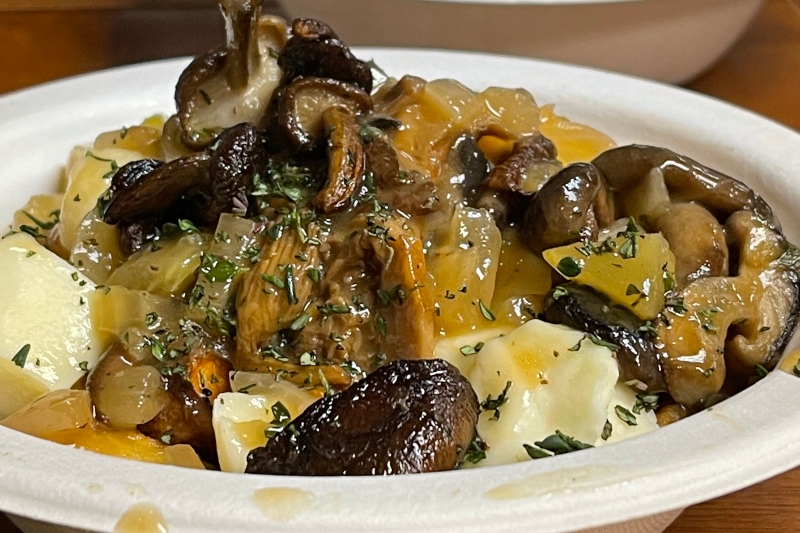 Price dependent on items selected. Actual price will be reflected in the cart.

We’re well into the season of hotdishes and slow-roasted meats; while raking up leaves and patching your eaves, why not warm up with mulled beverages and fatty carbohydrates?  There’re few methods of cooking quite as immediately comforting and easy as the introduction of food into hot oil.  We’ve had a few mentions of tempura and such beforehand, but with the season’s potatoes rolling on in, let’s take a look at some tips for taking your ‘taters and fixing up some “French” fries!

Originating in Belgium (allegedly) the “chip” (not to be confused with what Europeans call crisps)  is a humble staple that despite its common use in fast-food can be treated with the same care and intricacy as any other established dish.  For the sake of you, dear readers, and your American vernacular, I’ll refer to these lovely oblong potato sticks as “fries” from now on.  Apparently though I’ve never been, in Belgium, those street carts which popularized these food products sell fries and fries only, with accompaniment condiments commonly consisting of mayonnaise--though curry-ketchup, mustard, and vinegar are often available.  Since in the US it seems as if every provider of potatoes, fried, whips up a combination-special-sauce, we’ll leave your dipping condiment preferences as-is and say that simply any sauce, really, can adorn your fries--though mayonnaise is perhaps the best base to start with.

When picking out your potatoes, think about your idealized fry.  From the stout, stubby cuts you can make from smaller, waxier potatoes, to the long floury shoestrings of a Russet, the best way to find your perfect fry is to experiment.  There are no rules--your taste should be the only factor!  My favorite, a staple of the Belgians, is the Bintje potato.  Not as floury as a Russet, with a bit of a buttery sweetness as it cooks, these golden potatoes are a great balance of texture.  Huckleberry Gold potatoes are great for short, stout fries--which I like to use for chili-cheese or poutine (we’ll get there) preparations.  Waxier varieties, such as ozette, red, and such, tend to lend themselves more effectively in roasting applications, rather than frying--but work fantastically if balanced out with other varieties!  Sweet varieties, such as purple majesty or yams and such, can be fried up just fine--but I typically coat these with a thin batter first, as the sugars can burn before they crisp up.

For your fries, you’ll want either a potato press/fry cutter or a sharp knife, a large pot one-third full of cold water, and a sheet tray with a rack.  If you’re in a time-crunch, you can (in a separate, very dry pot) get your oil heated while you cut-and-blanch, provided you keep an eye on it and keep any water far from the oil.  As oil options go, use high-temperature, neutral options--from shortening and vegetable oil to corn, peanut, and lard, as long as you can heat it to four-hundred degrees safely, it’ll work just fine.  I prefer rice-bran oil because of its low allergen risk and price.  Make sure your fry-pot is either enameled or bare metal--nonstick coatings can (it’s happened to me) spontaneously combust if the Teflon-or-similar layer flakes off.  Be safe out there!

Clean your potatoes and start to cut them into batons--however you’d like as long as the diameter of each is similar enough--and immediately place them in your water-pot.  I typically average one-half pound of raw potatoes per person.  Once your potatoes have been cut, bring the pot to a boil over medium-medium-high heat, adding in a generous amount of salt.  Once the potatoes come to a boil, give them a gentle agitation and let them keep cooking until you can pull out a fry-to-be and cut it through cleanly with your knife.  I typically just bite one--if it still is a bit firm but has no distinct resistance, you’re good.  Once blanched, drain the potatoes and spread them out on your sheet tray (on the rack!) to cool.  Once they’ve cooled off a bit, you should be able to see a layer of starch “frost” the exteriors.  At this point they’re ready for the first oil-bath--though you can freeze them if desired for later cooking or to ensure a perfectly crisp exterior.

Once your oil and potatoes are ready, work in batches to fry off your fries, in fat at about three-hundred-twenty-five-degrees-fahrenheit, for a few minutes or until they begin to float just below the oil’s surface.  Drain them and continue.  Once they’ve all been fried, they should be a pale golden color, the starch should be “set” on the exterior, and the potato cooked through but not greasy.  Turn your oil up to about three-hundred-seventy degrees.

Just before serving, drop your fries into the oil and fry until they float.  Keep in mind that the fries will darken as they drain, so run a test batch or two if you’re unsure on timing.  Once drained, toss your fries through with salt or a seasoning blend of your choice--immediately so that the seasoning sticks-- before serving.  Now that you’ve got a great fry, let’s look at one of the best uses for these crispy tuber sticks--the Canadian diner classic known as poutine.

Poutine simply:  Fresh cheese curds over hot fries drizzled with gravy.  The specifics are up to you, but for the sake of the vegetarians (Vegans:  apart from a cheese-substitute, I have had great success with soft tofu gently fried in cornstarch, heavily dressed with doenjang or nutritional yeast)  we’ll make a great mushroom gravy to go atop!

In a heavy-bottomed pot, sear off mushrooms (for presentation I like to leave them mostly intact) until cooked through and lightly browned.  Remove your fungus garnish and add fat (butter, oil)  with an equivalent amount of flour.  Stir this up as a roux, and stir constantly as it darkens.  I prefer a deep brown roux for a mushroom gravy, so let it go until very dark (but not burned) before adding in minced onions and garlic,  letting those infuse for a few minutes before adding minced thyme and slowly adding vegetable-or-mushroom stock.  This should output a silky, rich gravy--season to taste and drop your fries!  Put your finished fries into a bowl or basket, arrange with mushrooms and cheese curds, then pour a ladleful of gravy over the lot.  The timing is important--but plating shouldn’t take more than a minute!  Feel free to use other proteins for your poutine and gravy as well--from a pork country gravy to a rich beef shank, your options are vast!

We”ll take a look at another medley of late-seasonal-transition fryer foods soon; though next we’ll be looking at what can be known by the monikers: “hotdish” “casserole” “pie” “bake” or “dip”  as a great example of the infinity provided by a dish’s ambiguity.  Fry free.

Add to Delivery
MY DELIVERIES

This delivery truck is empty.
Start adding some amazing products!

We Deliver To Your Area

To create your account and begin placing orders click continue. Or you can return to the market to browse our products.

Choose the distance you want to search for a pickup location:

Just this delivery: Removes all the suggested items for this week

All Future Deliveries Please:Deletes your order this week and cancels your subscription

There is no Checkout or Submit button to finalize your delivery. These items will be delivered unless removed. Enjoy!